If only the whole world could attend the Gender Odyssey conference.  It would make my daughter’s life so much easier, not to mention mine.  And it would make the rest of the world happier and smarter and kinder, too – I’m sure of it.

In August, I attended this annual conference for the third time, along with about a thousand other lucky souls – including a couple hundred families with kids like mine.  While our kids played in the free day camp, us parents gathered in conference rooms to swap stories, laugh, cry, rage, and learn.  If only everyone could be there and see what I’ve seen, hear the stories I’ve heard.  You’d be so inspired by the devotion of the parents, the smiles on the faces of the wee ones who are making their first friendships with other trans kids, the courage of the ass-kicking transgender teens (they speak on a panel, answering the questions and allaying the fears of moms and dads like me: “Look, they are teens and they’re trans and they’re OK!”)

If you were there, your heart would break at least half-a-dozen times in just three days:

“The doctor wouldn’t let my daughter get treated in time, so her voice dropped before we could get her on the meds.  Now she won’t talk because she thinks she sounds like a man.  I have to order for her at restaurants.”

“When my ex-husband found out my child was trans, he disowned her.”

“I found my five-year-old son in the bathroom with scissors, about to cut it off.”

And then your heart would be stitched up again with hope:

“After she transitioned, I saw her smile for the first time in a year. I have my child back.”

Some of the speakers and volunteers at the conference should be sainted.  Some of them are well-known in the transgender world, but most of them are just slogging away anonymously in the trenches, quietly trying to help just one more kid. I wish I could thank them adequately.  I hope they know how important they are, and that the bright future I see for my child is in part thanks to them.

One of the better-known speakers is Dr. Johanna Olson. She’s kind of a rock star at the conference and she packs the room whenever she speaks.  She’s hilarious and fearless and brilliant and when she talks, every parent in the room hangs on her every word. (TED Talk people: You should call her. She’ll go totally viral.)

Dr. Olson is the medical director of the Center for Transyouth Health and Development at Children’s Hospital Los Angeles, where she sees nearly 500 transgender and gender-nonconforming youth between the ages of three and 25.   Think about that.  Five hundred. That’s a big number.  That means that when she talks about trans kids, she knows what the hell she’s talking about.  Unlike pretty much everyone else who spouts off about kids like mine (like this guy and this woman and don’t even get me started about these guys), Dr. Olson actually has REAL-WORLD information (and lots of it) to back up what she’s saying.  And that’s why I’m going to share with you just a little bit of what she said to a roomful of terrified parents packed into a conference hall this summer.  All of us really needed to hear what she said, but so does the rest of the world.  So do you. (Plus I drew some pictures to make it more fun!)

Dr. Olson’s entertaining talk addressed some of the big questions faced by any parent of a transgender child.  And they’re probably the same questions that you’re wondering about, too, if you’re reading my blog:

Dr. Jo:  “Everyone asks me this question.”

All the parents in the room nod. Everyone asks us this question, too.

Dr. Jo:  “People say to me, ‘How can someone know their gender at this age?’ The thing is, I’ve heard people say that about three-year-olds, and I’ve heard people say that about 21-year-olds!  You know how, like, when your cisgender [nontransgender] kid was gonna try out for prom queen, and you were like, ‘I don’t know if you should, honey, cuz we don’t know if you’re a girl yet.’ It turns out that conversation never happens.”

This gets a good laugh.  Then she delivers the science:

“We actually have data on this. Research going back to the 1970s showed that gender constancy is intact by three to five years old.”

The mom next to me is scribbling furiously in a notebook. She smiles at me and hisses, “Oooh, my in-laws are gonna hear about this!”

Dr. Jo goes on to say that it’s also very common for kids to tell their parents they are transgender in their teen years.   Ironically, she says, these kids are seen as “less credible” than the kids who told their parents when they were younger. Huh?

Dr. Jo: “We tell our kids that they couldn’t possibly know their gender at three. They’re too young!  But if they wait until they’re a teenager to tell us, we say, ‘Why did you wait so long to tell me that you’re transgender? We didn’t you tell me when you were three?!”

(This conversation never happens if your kid isn’t transgender.)

“This is the other question everybody asks,” Dr. Jo says.  “Why do you have to slap a gender on your kid? Why can’t you just keep things neutral?” To answer this, she tells a story.

Several years ago, when she was eight-months pregnant, Dr. Jo got a call from a big-time TV producer.  He wanted to feature her in a story for a well-known prime-time news magazine. The guy came to the hospital where she works with trans youth and followed her around with a camera crew all day.  And one of the first questions he asked her was: “What are you having?”

And every single time he asked, she said, “A baby.” 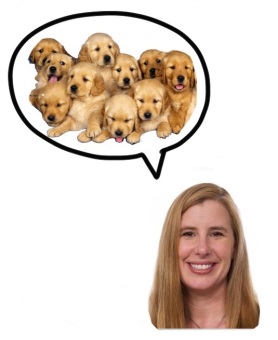 By the end of the day, Dr. Jo said, couldn’t take it anymore.  He asked her one last time: “What are you having?”

And she said, “Puppies!  I’m having puppies!”

That shut him up.

Dr Jo: “It got me thinking about how uncomfortable we are if we can’t gender people even before they are born. This makes it really difficult, if not impossible, to give your child a totally gender-neutral experience, unless you live in remote area of the woods where there are no billboards, no TV, and no interaction with any other human being. And then you can raise a gender-neutral child. It’s practically impossible otherwise.”

She’s right, of course.  I tried so hard to give my kiddo a gender-neutral start, to delay the day when she would have to pick a team and start acting the part. But since we don’t live off the grid in a hollow tree stump, gender tracked us down and began indoctrinating my child as soon as her eyes were strong enough to focus on the ads on the side of the city bus.  By the time she was two years old, she understood that there were two clearly delineated camps, and she was going to have to pick one:

Man, did I lose a lot of sleep over this one.

What if my kid changes her mind and wants to change back to being a boy?  And what if having lived as a girl for a year (or more?!) totally screws up my kid for the rest of his LIFE??

Dr. Jo: “There has actually never been one case – not one case published – where a kid has socially transitioned* and then decided that they were going to roll with their birth gender, and was harmed by it. No one’s ever even clinically talked about that, because it just doesn’t happen. Some kids have said, ‘Yeah, it was kind of awkward to tell my parents that I’d changed my mind,’ but they never say, ‘My life was ruined and I couldn’t go to college.'”

Around the room, shoulders relax.  Sighs of relief can be heard in every row. The mom next to me scribbles some more.  The in-laws are so wrong!
* Social transition = Changes that are entirely reversible and require no medical intervention, such as name and pronoun changes, wearing different clothing, and identifying in social settings as a different gender.  As Dr. Jo puts it, “It’s logistics, not medicine.” Like all young trans kids, this is the only transition that my child has undergone.

Is the little boy who won’t take off his sister’s Elsa costume just experimenting with color and fashion? Is the little girl who wants a buzz cut like Daddy just a “tomboy?” Or are they trans?

Lots of little boys love princesses, of course, and lots of little girls love sports and no-nonsense haircuts.  But that doesn’t mean they are transgender.  Statistics tell us that most of them probably aren’t.  So how do we know which ones ARE? 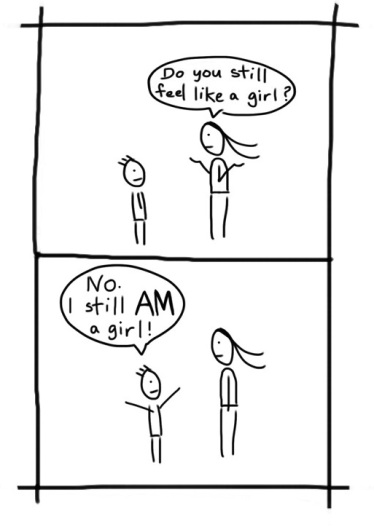 But she explains that there are clues. She refers to these clues as “Predictors of Persistence.”  The kids who are likely to “persist” in identifying as transgender often (though not always) look like this:

Dr. Jo: “They’re really distressed by their gender. These are kids who are trying to cut their body parts off with nail clippers, dental floss, scissors. These are kids who take baths with leggings on. There’s a lot of self-harm and suicidality, because walking around and not being authentic feels really, really bad for them.”

Dr. Jo: “Underwear and bathing suits are a big difference between kids who just want to dress like another gender and kids who tell us they really ARE another gender. It’s really common for transgender kids to ask for underwear that matches the gender they identify with.”

Dr. Jo: “When you ask them how they see themselves in the future, as a grown-up, it’s not the gender they were assigned at birth.”

Dr. Jo: “In pretend fantasy play, like when they’re playing house, or creating an avatar for a computer game, these kids will take on the gender they identify with.”

Dr. Jo emphasized that these are just clues, and that there are no hard-and-fast rules for identifying a transgender child. The best thing we can do, she said, is simply to listen to them. “Nobody knows your own gender better than you do, and that goes for children, too.”

109 thoughts on “Your questions answered.” 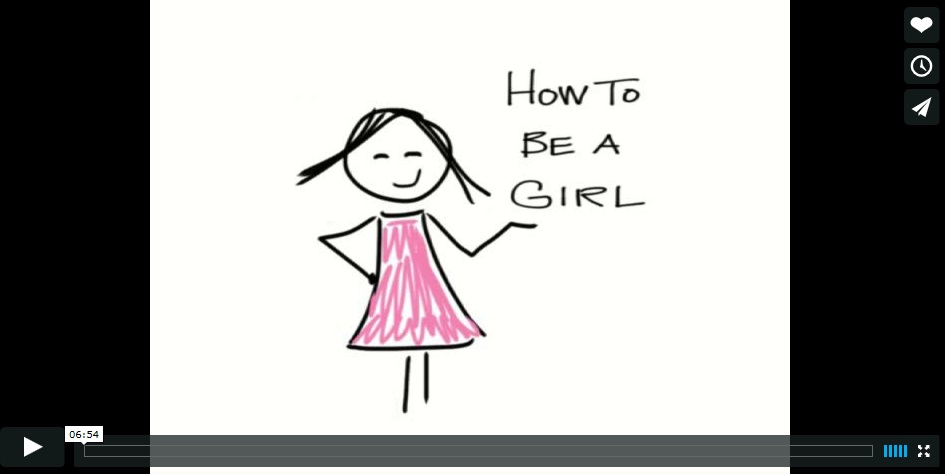