A couple of weeks ago, I read the following words in an article on the home page of The New York Times:

“…studies suggest that most young children with gender dysphoria eventually lose any desire to change sex, and may grow up to be gay, rather than transgender.”

Really? I sat forward in my seat. As the mother of a young transgender child, this sounded like information I needed to know! 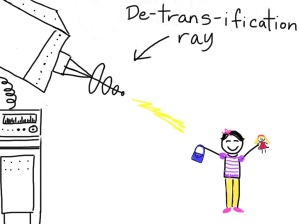 I read through the article once, then once again, eager to learn more. Just what were these studies?  And what else might they suggest? Perhaps they’d have some helpful suggestions for me, as I attempt to parent a child whose identity defies everything I have ever been taught about gender, thrusting us both into a situation that is mentioned exactly never in the parenting books. By golly, I said to myself, I need to get my mitts on those studies!

Alas, these suggestion-filled studies were nowhere to be found in Anemona Hartocollis’ lengthy profile of a transgender teen named Kat. (Although there was another equally uncited and ominous reference that began “some experts warn…”) 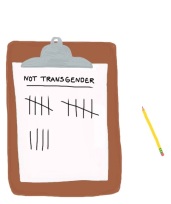 As Ms. Hartocollis acknowledged, we are currently living in “a transgender moment.”  And smack-dab in the middle of that moment are children like mine – the first generation of kids to be allowed to live in a different gender from a very early age (mine transitioned at age four).  Parents like me are highly “controversial.”  The public debate over whether we’re saving or scarring our children is a hot one. And believe me, in private, our doubts and fears and unanswered questions keep us up at night.

When my child first started telling me that she wasn’t the boy I had assumed she was, I went searching for the kind of studies referenced by Ms. Hartocollis. I’m a modern mom: I wanted more than suggestions; I wanted data.

The internet provided me with a wealth of similarly uncited claims:  Most kids like mine would change their minds, I read. I kept coming across the assertion that 80 percent of kids like mine would end up NOT being transgender.  Armed with this dubious data, I proceeded to doubt and question my child for a long and miserable year, ignoring her pleas and pronouncements until she gave up on me and started to retreat into a place no young child should go. When I relented and allowed her to begin living as a (blissfully happy) girl, the 80 percent statistic was thrown in my face by those accusing me of rash and irresponsible parenting.

It was time to get to the bottom of this. Where exactly did this number come from?  What were these studies that had suggested it in the first place?  Did they actually exist, and were they reliable and scientific, or was it the case of a “truth” that’s been repeated so many times, and cited by so many people (including journalists) with fancy credentials, that no one bothers to question it anymore?

Well, in a nutshell, here’s what I found out:

There have been NO (as in zero, zilch, nada, none) reliable long-term studies that follow transgender kids over time in order to determine how many of them “change their minds.”

To hear the story of my search for THE FACTS about kids like mine, check out the latest episode of my podcast, or (if you only have four minutes and you like cartoons), watch the slightly snarky animated version.

The Sissy Boy Syndrome: The Development of Homosexuality, Richard Green (1987)

21 thoughts on “THE FACTS (about transgender kids)”